So I am almost back. I arrived home from vacation very late on Sunday night, but have been trying to catch up with so many things. One thing I’ve noticed since I became a book blogger is that when I go on vacation I no longer read the number of books that I used to read (around six or seven down to ¾?). In fact, I read a good portion of a book that was at the rental property called “Necessary Losses” by Judith Viorst because shouldn’t a person read something dismal (yet semi-enlightening) while on a great holiday?! ha. However, I didn’t read much of any of the books I was supposed to read. Ketchup time!

Evidently going on holiday now means that I don’t read.

I am late again for Friday Fictioneers, but wrote the story. Since it’s late, I added a few words, which I normally wouldn’t do. I hope to be back to regularly scheduled programming later today or on Thursday with the book review I need to get done. ARGH!

Also, Louie the Loaner Dog is back for a stay so I’ll have some pics of him as well as pics from my vacation and road trip. Anyway, here’s my late contribution for Friday Fictioneers.

And thanks to all of you who have just followed my blog. I will be by to visit yours. Many thanks! 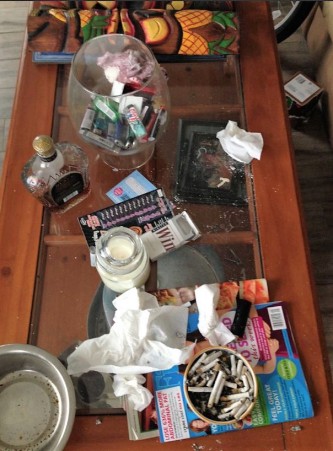 Us: six siblings drinking and smoking on the oceanfront deck, voices rising with the incoming tide.

It began well. Some joke. Some childhood reminiscence. Some allusion to our screwed-up parents.

Then shit got real.

An accident, a “surprise” my mother called me, I watched drama unfold: Rivalry. Bitterness. Seething anger.

“Why are you here? Think you’ll get money when one of us croaks?”

“They bailed you out every time.”

“You live in a dream-world.”

“You both failed and went back home.”

The more the alcohol flows, the more the years melt away until fifty- and sixty-year olds are teens again, angry at the world and each other. Unforgiving for things they know, sober, no longer matter. Reduced in thought and behavior. Tomorrow maybe there will be shame and a headache, abashed chuckles, before they return to their real lives, and forget each other again.

This website uses cookies to improve your experience while you navigate through the website. Out of these cookies, the cookies that are categorized as necessary are stored on your browser as they are essential for the working of basic functionalities of the website. We also use third-party cookies that help us analyze and understand how you use this website. These cookies will be stored in your browser only with your consent. You also have the option to opt-out of these cookies. But opting out of some of these cookies may have an effect on your browsing experience.
Necessary Always Enabled
Necessary cookies are absolutely essential for the website to function properly. This category only includes cookies that ensures basic functionalities and security features of the website. These cookies do not store any personal information.
Non-necessary
Any cookies that may not be particularly necessary for the website to function and is used specifically to collect user personal data via analytics, ads, other embedded contents are termed as non-necessary cookies. It is mandatory to procure user consent prior to running these cookies on your website.
SAVE & ACCEPT
As an Amazon affiliate, Sascha Darlington's Microcosm Explored may earn a reward from qualifying purchases from links used in posts throughout this site without any additional cost to the buyer.
%d bloggers like this: